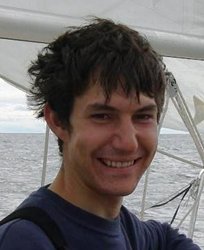 As a Metocean Advisor with PhysE Limited CJP is primarily involved in the quality control and analysis of metocean data from offshore platforms in the North Sea.

During his previous employment at Marine Scotland – Science (formally Fisheries Research Services) CJP designed an environmental study to monitor sedimentation and entrainment in the Firth of Lorn Marine SAC (special area of conservation). This involved analysis of local currents and background levels of particle suspension, to put into context sedimentation caused by dredging.